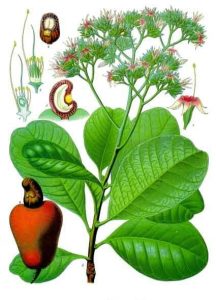 hew is locally called as Svay Chanthy and it has been grown in Cambodia for sometimes ago. At least during the 1960s, a Khmer traditional dancing song depicted the cashew in a song titled Oh Svay Chanthy which describes a young lady as beautiful as cashew tree or a young man as handsome as the cashew tree.

A particular variety of cashew has been known as a Khmer traditional verity grown over rural Cambodia for shade, firewood, cashew apple and cashew nut. This cashew variety can grow as high as about 12 m, and its branches grow wide as up to 7m in about 5 – 10 years. The older, the tree grows bigger.

Gradually, cashew business grows significantly through local traders engage with neighboring traders especially traders from Vietnam. Eventually, the cashew farms emerged from household farm to industrial size, especially in northern part of Cambodia. In response, some new varieties are introduced especially the ‘M’ variety, known by farmers in Cambodia. Two varieties – M21 and M23 are the most grown by Cambodia in the last 5 years. Most new cashew farmers choose ‘M’ varieties either M21 or M23 for their farms because the size of cashew nut is litter bigger than local variety.